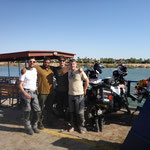 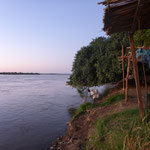 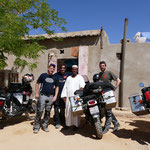 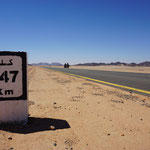 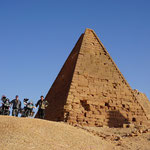 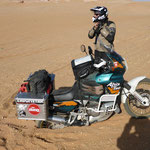 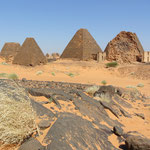 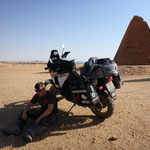 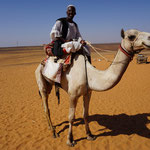 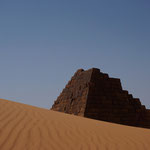 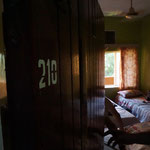 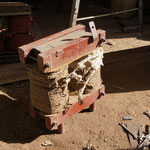 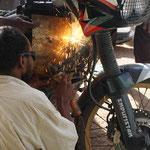 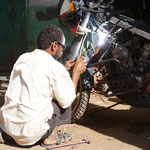 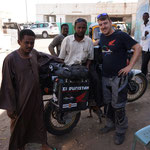 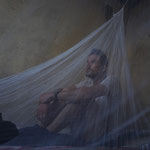 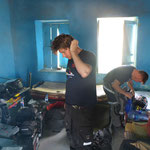 Again we needed a fixer for the Egypt / Sudan boarder crossing. Kamal is the man for such issues, since 15 years he helps overlanders to get through the process. We are the first foreign motorbikers that can use the newly opened boarder at Qustul. Former travelers needed to go on a passenger ferry for a 17 hour cruise along lake Nasser, having their vehicle shipped by a barge for 3 days. That ferry leaves Assuan only once a week. The new way goes to Abu Simbel via a former military road you can only drive if you join a convoi with an Egyptian. So we met Kamal in Assuan at 1:30 am. That means go to bed early try to sleep as much as you can, which is actually hard considering the constant noise made by car horns. Anyway we then drove behind Kamal a 230km stage to Abu Simbel where we arrived at around 5:30 in the morning. You then cross the Lake Nasser with a ferry operated by the army, drive another 60km to the new boarder. There Kamal organized all the needed stamps, our luggage got checked and after 2 hours we were free to leave Egypt. In Sudan you do need a fixer as well, Maghdi already awaits us, instantly he starts his work while we realize that Sudanese people are very different from Egyptians, they smile a lot, everyone was friendly. Still it took us 5 hours for the endless papers and forms that had to be filled, and off course it costs a good amount of US-Dollars. As the day passed by Maghdi invited us to sleep at his place, called his wife and told her about the three hungry Swiss Motorbikers. She did a fantastic job, serving us really tasty food and even brought us Whisky with mango juice. What Whisky? Isn’t alcohol supposed to be illegal in Sudan. Yes it is.

Sudan is mostly desert, a huge land awaiting to be crossed, temperatures go as high as 55°C in Summer and still reach 37°C in Winter at least. As long as you are not a desert fox, Sudan’s offers little to see, nubian pyramids in Karima and Meroe and the oldest temple made out of mud in Kerma from the Qush Kingdom. We visited all these places and especially Meroe Pyramids are absolutely terrific. But what really blows your mind away is the unbelievable generosity, hospitality and friendliness of the people of Sudan. Despite everything you ever heard about Sudan, we felt absolutely save and welcomed at any time during our stay in Sudan. You basically can’t stop somewhere without getting invited for Chai (Tea), cold drinks, or something to eat. We all traveled allot in the world and agreed in the end that we’ve never experienced something like that. Despite that Sudan gave us a hard time, the local guest houses called “lukandas” are lower than basic, either dusty or full of insects, for food they mostly eat “ful medames” beans with egg and goat cheese, eaten by hand using flat bread. It is hot very hot at all time and did we mention there is no beer available?

And then we head our first breakdowns, first Dorian felt with his bike on a sandy passage back to the main road and his right pannier got ripped off. We fixed it with zip ties and could fix it later in the evening by local mechanics. A few days later Rolf’s cooling system was leaking after a refill at a tank stop. Because of a broken screw the water cooler vibrated against the oil cooler. That one we tried to fix with liquid metal, the problem is it gets only dry below 30°C. That’s a real problem in Sudan, so we tried it again during the night and it worked out thanks to Dorian our bush doctor. The broken screw then had to be pulled out of the frame by some fantastic Sudanese bush mechanic the next morning. After almost 1’900km and 7 days in Sudan we reached the border of Ethiopia.

Sudan was “tamam”; what means “all good” in Arabic!