Egypt the land of bakshish and pharaos 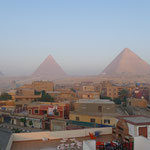 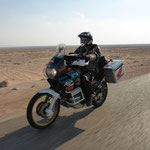 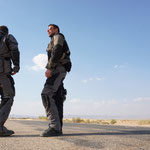 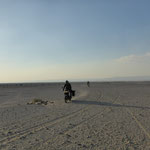 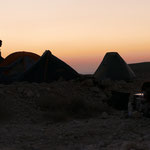 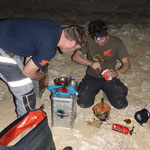 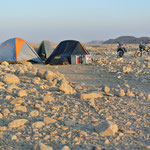 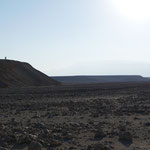 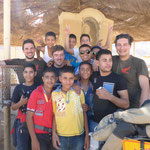 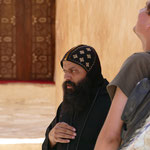 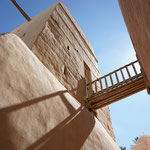 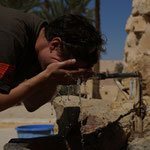 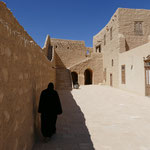 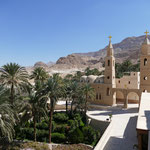 From Port Said we headed to Gizeh a part of Cairo, the 25 million capital of Egypt. Easier said then done, especially if you arrive exactly at rush hour after sunset. After two hours in Cairo's traffic jam, having our lungs filled with dust and smog and empty starving stomachs we arrived in Gizeh's Arab quarter. Not enough suffering for us, we searched another hour for a place to sleep and found the perfect hotel with two rooms available, the others under construction. The next day we needed to organize yet another paper from the traffic police, so we took a taxi to the city center and distributed some more bakshish to some more officials (just to find out later in Assuan, that we don't need this paper at all). Anyway we had enough smog and decided to give the pyramids a short visit in the morning with our bikes before heading to a coptic monastery in the Araba desert. But at the pyramids entrance we were refused to enter with our Africa Twins by some mafia like "officials", wearing Lacoste shirts and sunglasses. So we drove directly towards St. Antwan Monastery (the oldest coptic monastery worldwide). We all were in the mood for some offroad-action and luckily found a shortcut to the monastery. After asking a couple of locals we were sure that we would find the right track. Riding over solid gravel was fun and the 25 km seamed to be doable, but the track soon disappeared and so begun the operation "Wadistorm". The track ended up in a camel path (singletrack), the camel path ended up in a stone field with stones as big as footballs, yes we we got lost. Shortly before sundown and only 7,5 km away from the monastery, we knew that we can not reach the free food, the worldwide known coptic monk hospitality and their wine we were dreaming of. Instead we ended up in a Wadi (dry riverbed), opening up a can of pellati and cooking a pack of spaghetti. 1 million stars where our entertainment, what a fantastic sight. We found the track the next morning, visited the Monastery, got free food, went to the red sea, had a relaxing time at the beach and even went diving. After the temples of Luxor we already went off to Assuan to spend our last nights in Egypt. There we got our Sudan visa sorted out, visited a charming nubian village together with the villages oldest and got drunk with Sakara beer (10%) to prepare us for further challenges, such as the border crossing between Egypt and Sudan on a recently opened former military road.