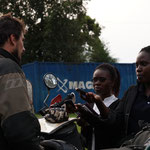 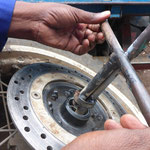 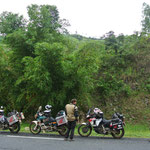 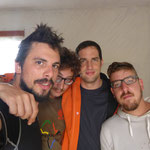 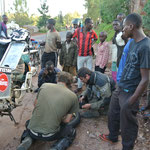 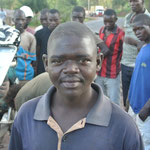 Rwanda is known for the genocide happened in the early 90ties. A little more than 20 years later we went to visit this very little piece of Africa also known as the land of thousand hills. The first impression of Rwanda was a boarder, clean, organized and relatively smooth. We then drove on perfect tarmac roads trough a green landscape and many little hills. After Uganda traffic, we where surprised that cars give correct signals when they turn left or right. Mario a good friend of us lives and works in Goma (DRC) for the UN. Goma is a boarder town of Gyseni. So we went there to visit him. At the shore of lake Kivu we arrived late just after it got dark and checked in a Hotel. Mario our friend came over and we had many stories to share and learned a lot about the UN operation in eastern Congo. The next morning it was again time to update our blog, do maintenance, specially to change the oil and fix the broken bearing of Dorian’s rear wheel. Mario came over from DRC again and we had great pizza, pasta, salad and tiramisu together with a bottle of delicious Italian Valpolicella. As Ruanda is a very small country we drove the next day to the capital city Kigali. We checked the rates at the “Mille Collins” the world famous hotel from the movie “Hotel Rwanda.” Now it is operated by Kempinski so obviously the rates don’t fit our budget and we decided to come back for evening drinks. It is impressive to see the hotel and to imagine what happened there, but beside that it’s not our world to hang out in a five star hotel, and the service level was one of the worst on our trip. So back to the real deal, we had a beer next door from our lodge and started to talk with local guys. As often good things happen spontaneously we went out with the guys and saw Kigali at night. Also we heard interesting stories about Rwanda. They have a community day once per month where everyone has to participate: they clean the roads, fix different infrastructure, plant trees etc.. Plastic bags are forbidden in Rwanda, they run a campaign that women and men get the same salary for same work. And the majority of the members of the parliament are women. Despite all these good news, there is a horrible past upon Rwanda. We went to the genocide memorial, a museum which explains what happened 20 years ago when Hutus slaughtered 1 million Tutsis, 2 million people fled out of the country and 500’000 women where raped. It is unbelievable how such things can happen, and it is even more unbelievable how they managed within 20 years to build up the country and live in peace. We have to admit that the president Mr. Kagame doesn’t accept opposition, that the media is controlled by the state, but on the other hand he does a lot of good things for his country. The people of Rwanda got the message that they have to forgive each other. From Kigali we planned to drive all the way to the boarder of Tanzania to cross it the next day. But 60km before the boarder Alex had his second puncture in the front tyre. This time he had a big cut in the tyre so it was clear that he can’t ride long distances with it. So we fixed it temporary to get to the next lodge which was only 5km away and had the idea to first call our friends from Holland Nikki and Stephane and ask them if they still have a spare tyre with them. And yes they still had two of them and promised to arrive the next day. So we where back together the five Africa Twins and went off to western Tanzania.